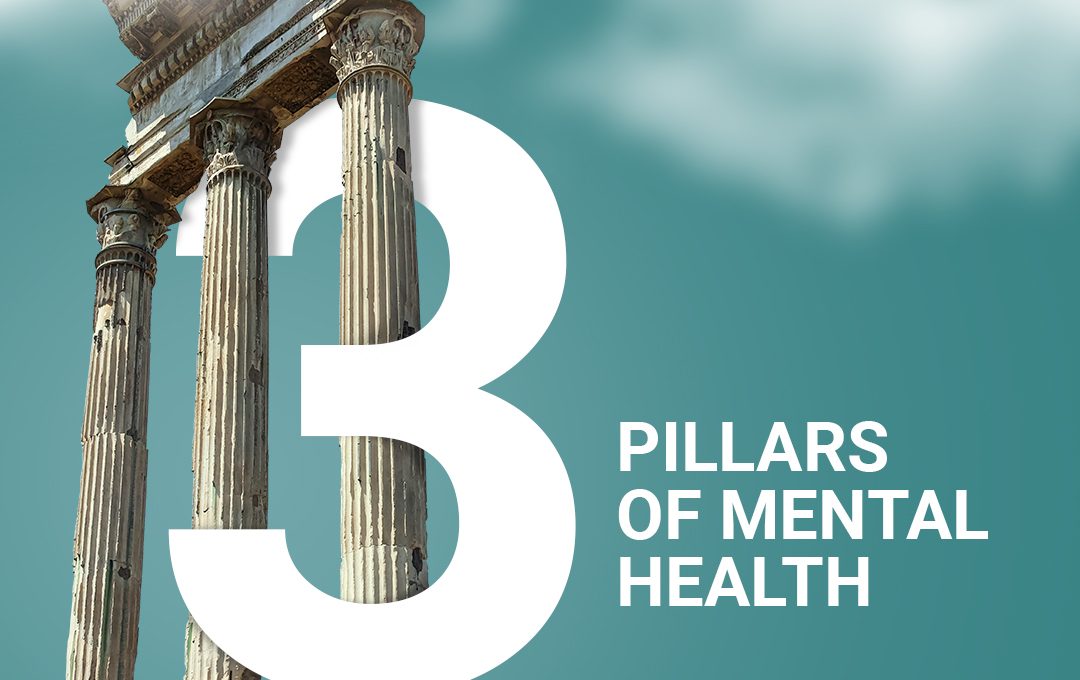 The 3 Pillars of Mental Health: Benefits of Sleep, Diet and Exercise.

Mental Health on a basic functioning level entail’s three key areas: 1. Sleep, 2. Diet, and 3. Exercise. When any or all of these areas are compromised, the mind and body will begin to provide you feedback. That feedback is often negative in the form of feeling tired, foggy, sluggish and you may begin to lose concentration and attention to tasks as well as that key driver to daily success, motivation. But more often than not, the negative feedback is overlooked and easily blamed on other environmental stressors, for example; work, study or family stress. It’s easy to ignore the lack of sleep because you have a big project due, or to miss that workout because you didn’t wake up in time, just like it might be easier to reach for a sugary snack because it boosts your energy quicker than something healthy that might take longer to kick in. Often people prioritise things like work, study and family over health because it naturally seems like the right thing to do. However, your health should be just as important and is something that needs tending to every single day because, if you’re not looking after yourself, it becomes increasingly difficult to help others. The saying “you cannot serve from an empty vessel “– Eleanor Brownn, suggests you cannot help others if you have not enough to help yourself. So how do we take care of ourselves on a daily basis?

First and foremost, sleep: A healthy adult requires 7-9 hours of sleep a night. Most people estimate that they are sleeping enough and are under the impression that losing an hour of sleep a night is trivial and inconsequential. It is anything but. Matthew Walker, a leading sleep scientist and professor of neuroscience and psychology at the University of California, Berkeley points out that humans have a recycle rate of around sixteen hours, where after this time the brain begins to fail. For a general idea, adults need more than seven hours of sleep each night to maintain cognitive performance and emotional stability. A study found that sleep deprivation can have detrimental effects on the brain and body where after ten days of just seven hours of sleep, the brain is as dysfunctional as it would be after going without sleep for twenty-four hours. The most interesting part of this study was that after ten days of having lost an hour of sleep per night, most people reported that they did not feel sleep deprived and were doing actually doing well – cognitive testing proceeding the poor sleep phase suggested otherwise. Routinely sleeping less than six or seven hours a night compromises your immune system, memory, attention and emotion regulation. On the contrary, some people may be getting more than 7 hours of sleep a night, but are still waking up the next day feeling fatigued and reporting symptoms similar to sleep deprivation. Based on this, you might be suffering from an undiagnosed sleep disorder (there are more than 100 sleep disorders). The most common is insomnia, followed by sleep-disordered breathing (sleep apnea). If you feel you may be suffering from a sleep disorder, speak to your doctor immediately and seek a referral to a sleep specialist.

The next pillar to be mindful of is diet. Although serotonin is well known as a brain neurotransmitter, it is estimated that 90 percent of the body’s serotonin is made in the digestive tract and plays a role in emotions and happiness. So, it’s no wonder that what you eat can affect how you feel. The brain-gut theory supports the connection between our brain and the gastrointestinal (GI) system. Latest researchers have been working on providing evidence about the beneficial effects of the link between the central nervous system and the GI tract. The findings of the clinical trials show that the foods you eat have certain psychological outcomes for human beings. This is a very effective approach leading to the control and prevention of many mental health disorders. Further to the interaction of serotonin on the GI, it also plays a role in digestion. As serotonin is primarily found in your gut, it is essential for digestion and can be affected by poor sleep and stress. Your sleep wake cycle is supported by a delicate balance of cortisol (stress hormone), and melatonin (sleep hormone). Ideally, melatonin should be rising at night to facilitate sleep, while cortisol should peak in the morning helping you to wake up. However, both have its challenges if attempting to function at the same time. High cortisol levels signal your brain that you are in a dangerous situation, so it is hard to fall asleep during that time. Too much cortisol can also affect the balance of serotonin depleting it in the gut and leading to problems with bowels and can slow down the digestive system – another reason to ensure you’re getting enough sleep and reducing stress levels where possible. The gut health helps in attaining good mood and better cognitive skills i.e. stamina, memory and behavioural outcomes. Plan a few goals and keep yourself connected with your mind and body for overall health.

Sleep also has an effect on diet, which is an important link to understand its functional value. Essentially, sleep regulates appetite through two hormones, ghrelin and leptin. When the body is sleep-deprived, the level of ghrelin spikes, while the level of leptin falls, leading to an increase in hunger. In other words, when you’re tired, your mind activates ghrelin, which we can call the hungry gremlin hormone that triggers feelings of hunger and creates intense cravings for fat and sugar-laden foods. This serves as a functional purpose to exacerbate your need for additional energy sources in order to maintain a wakeful state. However, it makes healthier choices more challenging than if you had a good sleep and were running off more sustainable energy sources. Sugar and fat are great fast activating energy sources for a shot-term outcome, but are not overly sustainable or healthy long-term.

Exercise is the final pillar to outline. Exercise improves mental health by reducing anxiety, depression and negative mood, while at the same time increasing self-esteem and cognitive function. Further to this, exercise stimulates endorphins and endorphins make us “feel good.” Getting the body moving in any capacity can help to decrease tension in the body. Studies have shown that one vigorous exercise can help alleviate symptoms of anxiety for hours, and a regular schedule may significantly reduce them over time. But while vigorous exercise isn’t for everyone, particularly when feeling under pressure, Psychologists studying how exercise relieves anxiety suggested that even a 10-minute walk could be effective in alleviating symptoms of anxiety.

Sleep is also an important factor when it comes to exercise where sleep and physical exertion have a bidirectional relationship. Have you ever been on a day-long hike, an extended bike ride, or even just had an exhausting day at work and noticed that you sleep more deeply after doing so? Studies show that increased levels of physical activity correspond to progressive increase in the amount of deep (NREM) sleep. This relationship is a great example of which pillar is most important when it comes to sleep, diet and exercise. Overall, each pillar requires the other to function and serve a purpose to facilitate one another. The functional link between all three pillars are important to understand their effectiveness when utilised in conjunction.